I draw the line at calling the physician experience a ‘Human Rights Violations”.

I draw the line at calling the physician experience a ‘Human Rights Violations”.

Our profession as physicians is in crisis, but “human rights violations” and “moral injury” are inaccurate terms to use.

It may be surprising to some that I am writing this piece as I am viewed as a staunch physician advocate. In 2017, I was stunned after a beloved classmate from medical school took his life. I felt I had let him down by missing signs of distress — dismissing them because he was a “doctor” and not one of my psychiatric patients. The void he left behind felt greater somehow than the loss of one person — there was a multiplier effect. He was a classmate, a veteran, an exceptional human being, and an ER physician.

While we will miss Jason, how many patients will miss the opportunity of having this wonderful physician? It is estimated to be 3,000 patient contacts per year. Wow. Just wow. Somehow a plaque to honor Jason in the halls of our medical school didn’t seem like enough given the implications of this loss and the sense that it was preventable.

I decided to honor Jason by providing what I should have for him — a sense of community. I started a Facebook group, “Physician to Physician: Healing the Practice of Medicine,” for physicians to have a safe, private place to share their experiences — peer-to-peer — as a way of trying to reduce the isolation and, along the way, address physician burnout syndrome from our perspective — not from what is prescribed to us as our malady.

And two and a half years and 2.6k+
members later, we have indeed built a community. I believe we have learned more about our condition — we have learned how to define the words used to describe our experiences, including “burnout” and “wellness” as language is powerful in what it ultimately reinforces, minimizes and to whom it assigns blame.

Of late, there have been two new terms used to describe the current physician experience which I find difficult to wrap my head around: “human rights violations” along with “moral injury” being the what is truly occurring instead of physician burnout syndrome. While these terms are catchy, they lack a grounded foundation and, thus, risk undermining our cause altogether.

For example, it is bold to claim “human rights violations” when most physicians, myself included, weren’t exactly forced into medical school or residency. I begged and pleaded for my position as an MS1 and thanked every deity known when I matched as a PGY1. I freely chose to have two children during training knowing that it would be nothing like what another woman in a different profession would experience. It was hard as hell, but I dd not suffer human rights violations. And it was my choice.

Maybe I am unusual in that I have heard the stories of hundreds of individuals who have experienced human rights violations. My one year working at the medical center at an ICE detention center brought with it a daily dose of meeting people who had escaped atrocities I had only read about — and some I never had. From female genital mutilation and the sequela (severe scarring, pain) to being trafficked as a sex worker (being moved from country to country and forced to have sex with up to 20 men a day) — these are human rights violations.

I have heard the argument that our suicide rate — 2.2 times that of the general population — is the basis for the human rights violation claim.
Suicide is a serious problem that needs to be addressed in our profession. Suicide has also peaked at a 50-year high in the U.S. contributing to the lowering of the life expectancy for Americans in 2017 for the first time since World War II. It is the second leading cause of death for teens and the fourth leading cause of death for women between the ages of 35-55. Do we declare those populations as undergoing human rights violations because enforcement of the mental health parity law of 2010 is lackadaisical, therefore, limiting access? Where does one draw the line? I have a difficult time assigning “human rights” violations to my own demographic because of our suicide rate but ignoring other demographics — including inmates who are literally captive.

And why is the term “moral injury” problematic? Besides being amorphous, it is used in conjunction with, “there is no physician burnout, it is moral injury.” The old adage, “don’t throw the baby out with the bathwater,” comes to mind. It is undeniable that our profession is suffering, yet that does not mean physician burnout syndrome doesn’t exist.
In fact, if it weren’t for those of us who have contributed to compiling data to legitimize physician burnout, the term wouldn’t be part of the vocabulary as it is now.

When I did a study on physician burnout as a resident in 2012, I had to explain what I was studying and why multiple times. This topic was new and quite controversial.
Since then, a great deal of effort has gone into building a foundation for understanding what physician burnout is (it is not “stress,” nor it is the opposite of “wellness” — it is a syndrome defined as having three characteristics: emotional exhaustion, negative feelings about patients and a sense of low personal accomplishment).

This syndrome is measured using a validated tool — the MBI. Physician burnout even has identifiable causes, the most notable being loss of autonomy and EMR. We even have identified evidence-based interventions with peer-to-peer support in the form of groups — ideally one hour during the work week being the one with the most evidence supporting it. Recently, new studies show an impact with the use of scribes as well as leadership style.

Physician burnout syndrome does not improve and is not preventable with mindfulness training (research shows that stress can be reduced, but not physician burnout). There is also no evidence that becoming more “resilient” as physicians reduces our burnout rates. Change needs to occur bi-directionally.

Yet dismissing this entire phenomenon and calling it “moral injury” removes the opportunity to generate change at the institutional level. Instead of walking into a boardroom and discussing the integration of scribes as a viable intervention, one would propose the problem of “moral injury” and “human rights violations” for the agenda? What would be the potential interventions? Moral healing and a UN referendum?

And therein lies the dilemma — sounding alarms without identifying a clear pathway to safety. Physicians will be in a state of panic when it behooves us to be productive, sitting on boards, joining committees, applying for directorships, for example. We can’t be heard unless we have a seat at the table. And if we expect to be heard, what we say needs to be clear and precise. 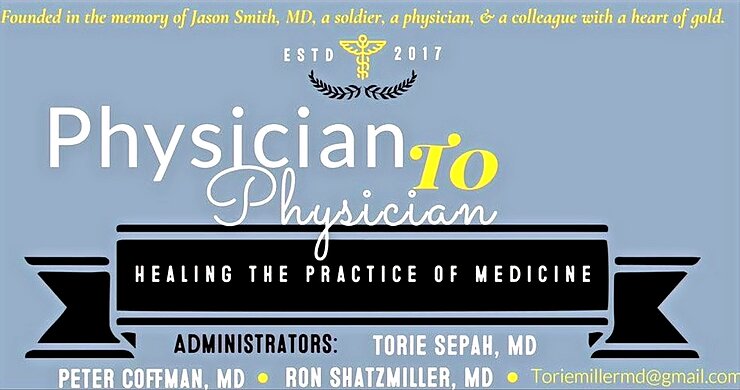